Employers' unions and economic operators build on the mechanism put in place
20 Sep, 2022

On Tuesday 20 September 2022, at the Brazzaville Chamber of Commerce, Wilfrid Albert Ossié, Director of Cabinet of Rigobert Roger Andely, Minister of Finance, Budget and Public Portfolio, discussed with Employers' Unions and economic operators the mechanism put in place by the State for the payment of their debts, the amounts of which are between CFA F 10 and 50 million. The discussions took place in the presence of Paul Obambi, President of the Chamber of Commerce, Agriculture, Industry and Trade of Brazzaville.

On this occasion, representatives of Employers' Unions, the Chamber of Commerce, consultancy firms and economic operators were briefed on the mechanism for the payment of domestic commercial debt.

The representatives of the Trade Unions asked several questions. In particular, they asked about the 35% discount proposed by the State, which was considered ‘’too high’’. On this subject, the Director of Cabinet rather considered that ‘’the State has taken into account all the parameters, respecting its commitments to all its bilateral and multilateral partners, since economic operators will benefit from a reduction in the rate of taxation of penalties and main duties, granted by the State, going up to 80% reduction, at the level of the Tax Office. This is a first in the history of the Congo. The 35% discount cannot therefore be a problem’’.

In explaining the motive for this meeting with creditors, Wilfrid Albert Ossié first welcomed the mobilisation of economic operators, promising that this kind of dialogue or consultation would become a tradition, so that exchanges would be permanent.

Extract from the communication of the Director of Cabinet

‘’This is the second time that I find myself in front of you. I remind you that in the roadmap of the President of the Republic's social project, Denis Sassou-N'Guesso, he instructed us to speed up the reorganisation of public finance and the restoration of the authority of the State. As you know, the State is an important economic operator, it is a major client, the largest supplier to the national economy. If it does not respect its commitments, there will be a negative impact on your activities in the private sector. This is why the Minister of Finance has launched a number of projects.

The first was to restore the country's credibility vis-à-vis the international financial community, because a country cannot live in autarky. Then, the Minister initiated discussions with other bilateral and multilateral creditors. Most of them have signed agreements with us. We are respecting them, paying the state's debts regularly. He also committed the country's credibility in the Central African sub-region.

Congo's debt has been relatively better rated for some time now. The Minister is determined to strengthen and improve this credibility.

Another aspect was the State's relations with those who participate in domestic growth, particularly economic operators, who had a very large debt for which no solution had been found. It was also necessary to pay the salaries of state employees and the pensions of retirees regularly.

With regard to the payment of domestic commercial debt, there are good and bad sides. The partners we work with had demanded an audit of this debt, to know what the state really owes. At the Caisse Congolaise d'Amortissement (CCA), there is a file of validated debt and claims that we are currently examining. Depending on the resources of the State, we have started to pay the debt of zero to CFA F 10 (ten) million, because it is a small debt that concerns Congolese people and small-scale Congolese economic operators. This allowed us to clean up the debt file. This small debt was paid in full, without any discount.

The 35% haircut that will be applied to debts of CFA F 10 to 50 million will enable the state to pay its debts. If this discount is not applied, with the enormity of the ‘’large debt’’, it will be difficult for the State, in the current circumstances, to get by. Because the government's concern is also to relaunch growth, which is a question of anticipation, in order to plan the investments necessary for development’’.

The President of the Brazzaville Chamber of Commerce, on behalf of the Employers' unions, asked the State to allow economic operators to include, in the 35% discount, the payment of their debts to the tax authorities as well as to the National Social Security Fund (CNSS). The Director of Cabinet took note of this request and undertook to forward it to the supervisory authority.

The Communication Unit of the Ministry of Finance 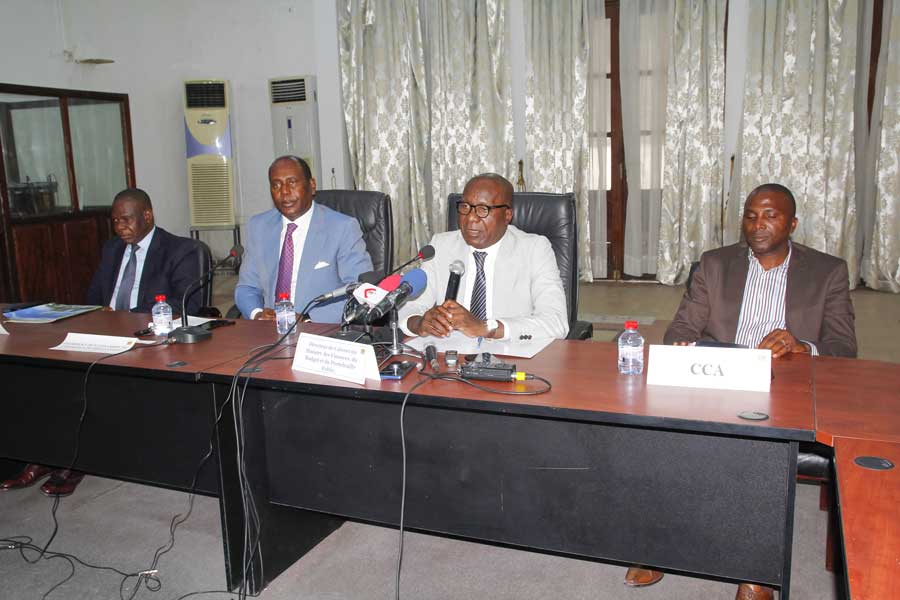