"The Extension of the Project for the Digitization of Operations of Motor Vehicle Inspection Centers leads us to the interconnection of insurance and technical control," Jean Pierre Nonault said
14 Nov, 2022

A presentation ceremony of the extension of the Project of digitization of the operations of the technical control centers of motor vehicles (PDOCT) was sponsored, Monday November 14, 2022 in Brazzaville, by Jean Pierre Nonault, Director General of the national financial institutions (DGIFN), representing Jean-Baptiste Ondaye, Minister of Economy and Finance. In the presence of Fidèle Yengo, Land Transport Advisor to Honoré Sayi, Minister of Transport, Civil Aviation and the Merchant Navy, and Girest Sadate Manzékélé-Bokenga, Director General of Land Transport (DGTT).

The presentation of the extension of the Project, made by Zouheir Ben Ali, General Manager of the Congolese State's partner company SIGA-BC (Computerized System and Automated Management, Congo Basin), was part of the collaboration between the DGIFN (under the Ministry of Economy and Finance) and the DGTT (under the Ministry of Transport, Civil Aviation and Merchant Navy), through the Project for the Digitization of the Operations of the Technical Control Centres of Motor Vehicles (PDOCT)

"The extension of the PDOCT leads us to the interconnection of insurance and technical inspection. This is not a matter of a forced digitization of motor insurance, but rather of a preparation for this digitization. It is a matter of capturing technical inspection and insurance data on a common, secure medium", stated Jean Pierre Nonault. "The digitization of technical inspection centers will not only modernize all the operations inherent in technical inspections of vehicles, but will also now help to collect insurance data from all the insurance companies in Congo and their intermediaries. All this in real time", the DGIFN said, before specifying that "the DGIFN-DGTT collaboration will eventually favour the "exact" control of the statistics of the vehicle fleet and insured vehicles throughout the national territory, as well as the potential impacts on the management of cities, in particular, and on the Congolese economy, in general".

Objectives of the launch of the PDOCT platform

"The PDOCT platform was presented on 23 August 2022 in Brazzaville. Its launch by the DGTT took place at the beginning of November of the same year", Girest Sadate Manzékélé said. The objectives of the launch of this platform by the DGTT are the same as those of the DGIFN, namely: securing the data of insured persons; creating a national database of insured persons; reducing claims (effect induced by an obligation to carry out technical checks on vehicles before being insured); and combating the falsification of data, a major problem encountered during field checks by the police, in the interest of insured persons. The long-term objective is to have a single sticker that provides all the information on the technical inspection and insurance of a vehicle.

The Communication Unit of the Ministries of Finance and Budget 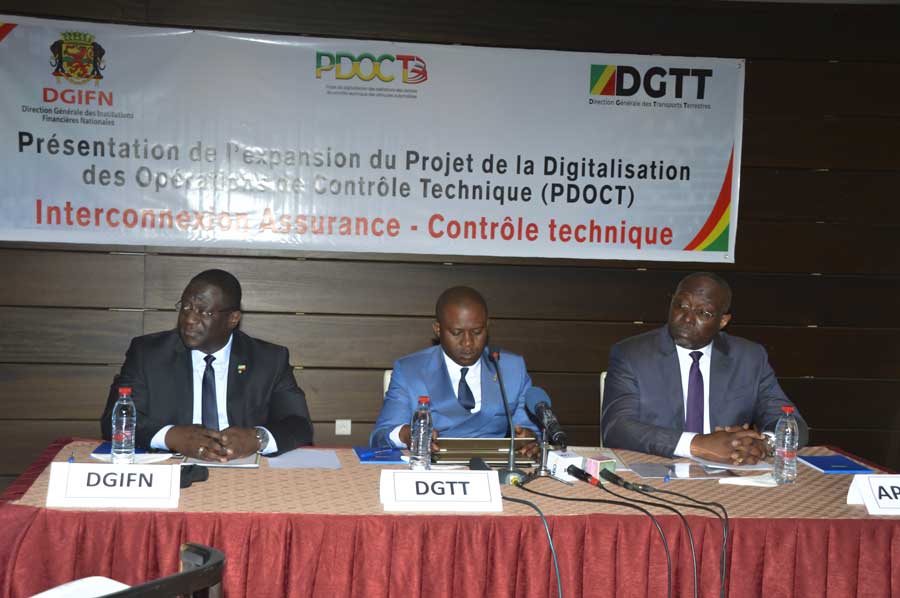